I made the mistake last Friday, of attempting to go on a girls’ weekend in Washington, DC. As if my kids could sense my impending disappearance, they quickly succumbed to the stomach flu putting a serious damper on my plans. In between loads of laundry and unpleasant “sessions” in the bathroom with the girls, I went out to the barn to check on the lambs, only to discover they were seriously sick as well. I somehow managed to still make it on my trip, but had to shorten it by a day and a half. When all seemed settled and calm on the home front, I made my escape, only to get a phone call the moment I stepped foot out of my car in DC. So this week’s Farm Notes are organized by species, not day of the week. We have some catching up to do.

CHICKENS: The chicks have now graduated to the outdoor coop. Of course the second day of their move, the temperatures dropped dramatically overnight. We covered the windows and packed some bales of straw in the coop and all is well. They are loving their new-found freedom and have stopped picking and pecking at each other, now that they aren’t in such close quarters. Elizabeth is doing a great job of managing their feeding, watering and bicycle basket training. 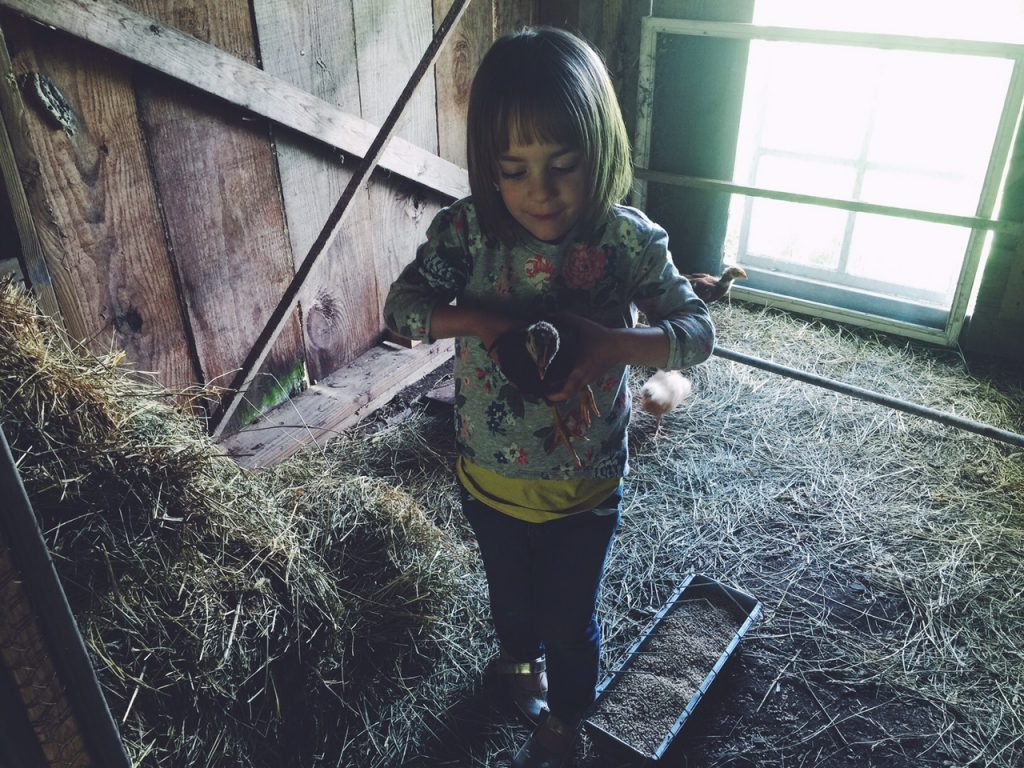 PONY: Like the good Shetland pony that she is, Tinkerbell has already managed to almost founder on barely any growth of grass in the field. Although this is primetime for foundering because of the new, rich growth. So she’s been on stall arrest, getting a few hours of field time each day, daily doses of bute and is “all clear” now. She’ll have to be watched all summer and not have complete turn out in the pasture. She also puts up a fight when we try to get her out of the field and back into her stall. She knows why we’re coming for her and doesn’t want to go in. She managed to get loose and run up the road to the neighbor’s house this week before getting caught. The girls call her “Stinkerbell”. Seems appropriate. Cleaned out mites/gnat bites in her ears–they are bad for everyone right now. Looking better now and she’s definitely more comfortable.

SHEEP: All the lambs were sheared this week, then the temperatures dropped dramatically. Of course. But thankfully, the older sheep seem to have a good layer of fat to keep them warm. (We’ll have to work on that this summer.) Went out to check on the 4-H lambs on Friday after Mary came in from chores and said that one of them wasn’t getting up to eat. All four of them were preferring to lay down instead of stand up, weren’t holding their heads up and ears were droopy. I could tell something was definitely wrong. Called the vet. Thankfully, she was at Grandpa’s farm working on a bull and came pretty quickly. She thought it was upper respiratory because of the dramatic weather changes we’d been having. She gave them all antibiotics and something for their fevers. They were looking better the next morning, so I left for my trip that afternoon. When I arrived in DC–got a call back from the vet. She run some tests and they had coccidious, which can be deadly. There is a saying that a sick sheep is a dead sheep because they are so fragile once they get sick. Called home to Dan telling him he had to track down the medicine they needed, only to find out that one of the kids had just gotten the stomach bug again.  Somehow he managed to wrangle kids and get sheep going on medicine. All seem to be well now and improving. Hoping we can just make it to the fair without any more drama.

BARN CATS: The cats have given me no drama this past week. For this I am grateful.