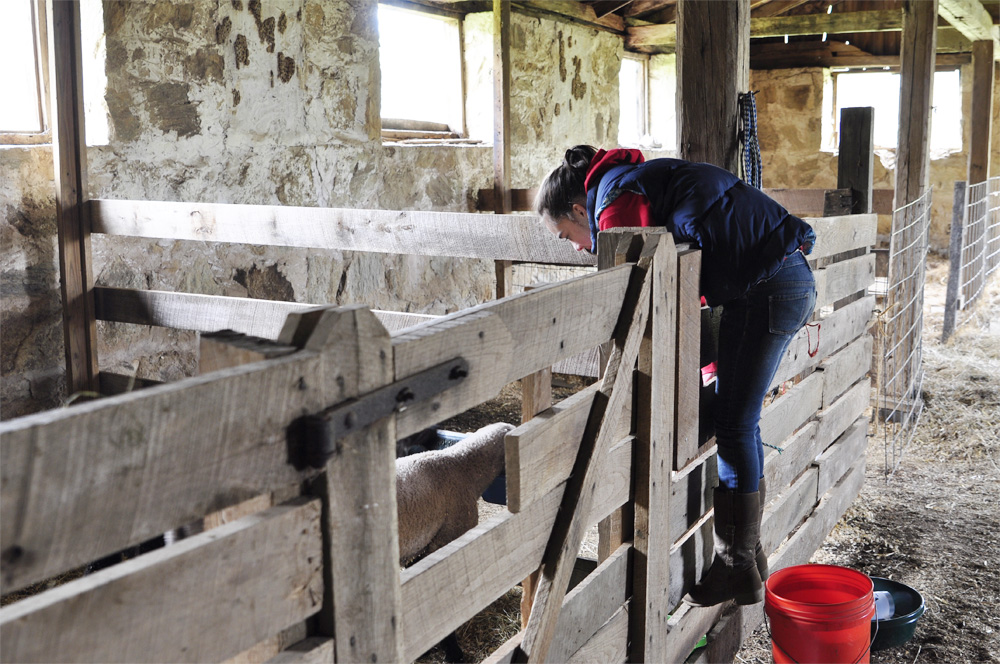 There’s a rule in 4-H that kids have to be 8 years-old before they are allowed to show animals in the county fair. And when you’re a kid, the wait to reach that 8-year-old milestone can seem like an eternity. When Mary’s turn finally came she was excited to be able to show one of the first lambs we had raised on our own. Her older sister already had two years of experience with showing sheep in the fair and so Mary was anxious to try as well.

Showing lambs in the fair comes with lots of responsibilities. The daily feeding, hauling of water buckets, teaching them to walk on halters, learning how to handle them in the show ring, washing lambs, keeping track of how much you spend on grain, watching weights to be sure they are gaining enough for the fair…it’s a lot.

And that first year for Mary had a lot of bumps. To be honest, once she signed on the dotted line to show in the fair, the enthusiasm pretty much stopped there. Emma did most of the daily chores. There were half-hearted attempts at training. And not much interest despite her parents’ prodding.

When fair week finally arrived, there was much to be done. Animals were hauled to the fair grounds. Feed and hay and buckets and supplies were packed. And the animals were prepped for the show that was just a few days away.

During most of the fair, Emma and I found ourselves in swirl of work and sweat and stress. I remember at one point standing in the middle of the wash rack, with four lambs, two kids–soap and hoses and puddles. “Make sure you wash under their stomachs. Get between their front legs. Really scrub. That part looks stained, you might need to scrub it really hard. You need more soap. Make sure you rinse.” I tried my best to help without taking over–these were their projects after all. I remember at one point looking over at Mary. She stood there, nonchalantly and gingerly washing her lamb’s back with her finger tips–obviously disgusted by the task and totally not into the heat and the wet and the mess. She was grumpy. Annoyed. And not wanting to help. It was a moment that pretty much summed up the whole experience of the last few months. I turned to my husband and said, “We’re not doing this again next year.”

And the next year, we didn’t. When spring came and it was time to get lambs for the fair Mary wasn’t interested (and I was secretly relieved.)

So this winter, when Mary started hinting at the fact that she wanted to try showing lambs again, I was still skeptical and haunted by the experience two years ago. “We’ll see.” I said, putting off how I would tell her that I wasn’t doing it again. That I didn’t think she was cut out for this kind of thing. That she needed to remember how hot it was in the summer and how much fun she didn’t have.

But she kept asking.

And I kept putting off a decision.

Finally, one night I talked to Dan. “I think we might need to give her another chance.” I told him. “She keeps asking and I don’t know what to do. I guess she at least deserves to try one more time. But I already know how this is going to end.”

Eventually, we relented and in April, two more lambs were purchased for this year’s fair. 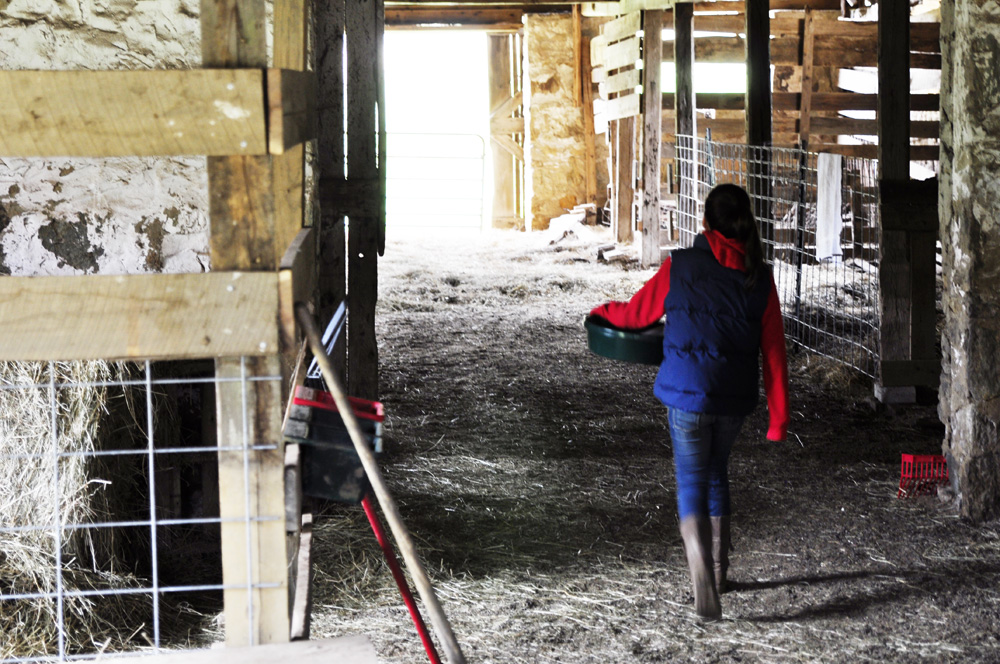 We got Mary’s lambs from a family friend who lived a few hours away. She delivered them to our farm and they arrived before any of the other lambs. Emma was still in school, Mary was home and so she had to immediately get down to work. She spent the first several days in the barn. Between school and errands, I’d find her in their pen. She carried a stool from the house and would sit with them, talking to them and coaxing them to come up to her. She’d take her schoolwork out on a clipboard and sit in the windowsill of the barn, keeping an eye on them, singing to them, being around them.

When it came to feeding, things got complicated. We were changing the way we did things this  year. Being more exact and proactive. We were weighing all their grain before each feeding. Slowly making incremental changes, so they could adjust. Watching how much they ate so we could figure out how much we should give them each day. Making sure they had just the right amount of hay. Keeping water buckets filled. 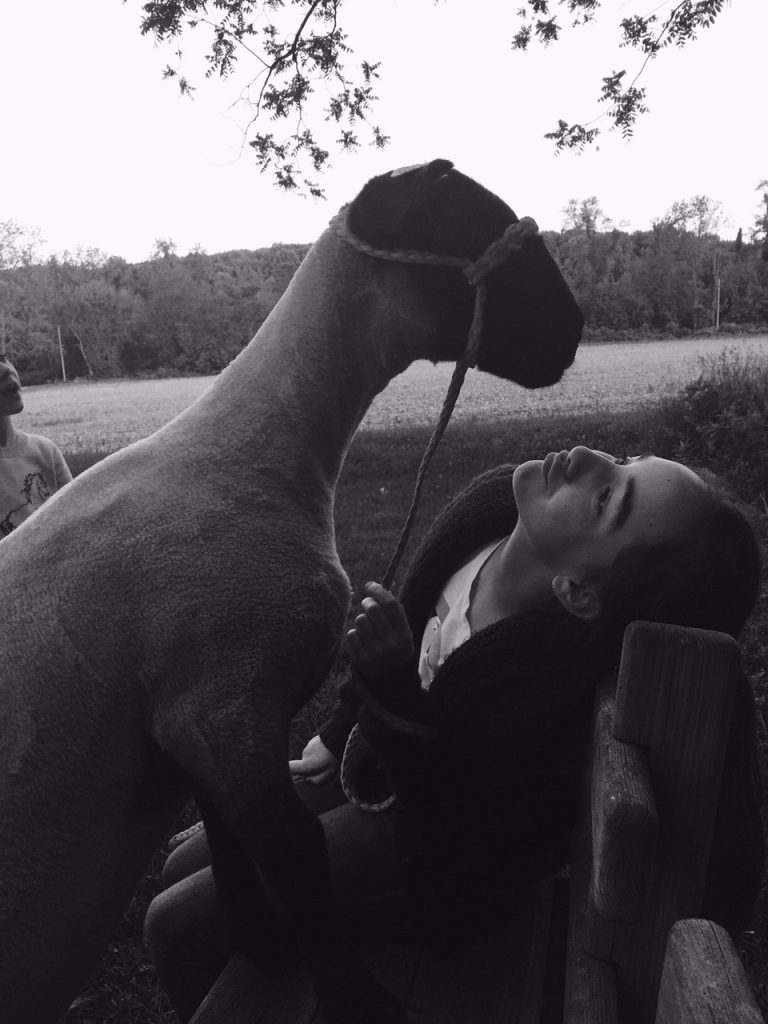 And I put Mary in charge of everything.

Did you remember to water, weigh the grain, check the hay, turn on the fan….my list of reminders was long and involved but she was always on top of it.

When the lambs got sick, Mary was the one who noticed first. She had spent enough time with them to notice that something seemed off. Someone wouldn’t get up when she walked in. Someone’s ears were droopy. Their breathing was heavy. And she called it. They were sick and going downhill fast. And needed the vet.

I was impressed but still leaning towards skeptical–mother of the  year, that I am. I found myself waiting for the enthusiasm to wear off.

And my kid who I thought wasn’t up to the task and  the work and the responsibility has completely proved me wrong.

I have to admit, I got this parenting test all wrong. I thought I had Mary figured out. She wasn’t my “worker” kid. She wasn’t ready for this much responsibility. Farm animals really weren’t “her thing”. But my sweeping generalizations of her were wrong. Her ability to manage, work, love, care for, and take responsibility for these lambs is stunning. Over and over again the last several weeks, I’ve sung her praise to family and friends, and most importantly, to Mary herself. 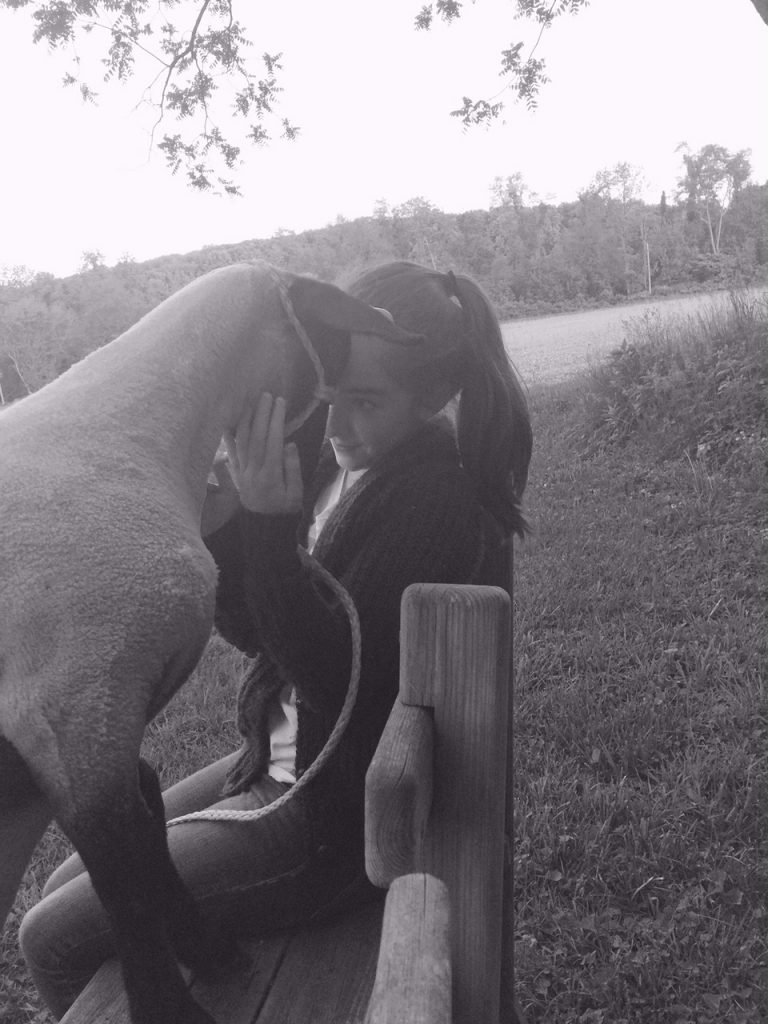 I know it’s been said before. I know in my head I know it. But now I know it in my heart. Kids deserve second chances. They deserve time to grow. They deserve to try again. They deserve space and time to change. They deserve to blow it and be given an opportunity to turn it around. I wish I could say I knew she had it in her all the time. Or hand over a list of seven ways to teach your kids to be more responsible because I’m so good at it, but it turns out, I also blew it the first time around.

13 comments on “Second chances all around”