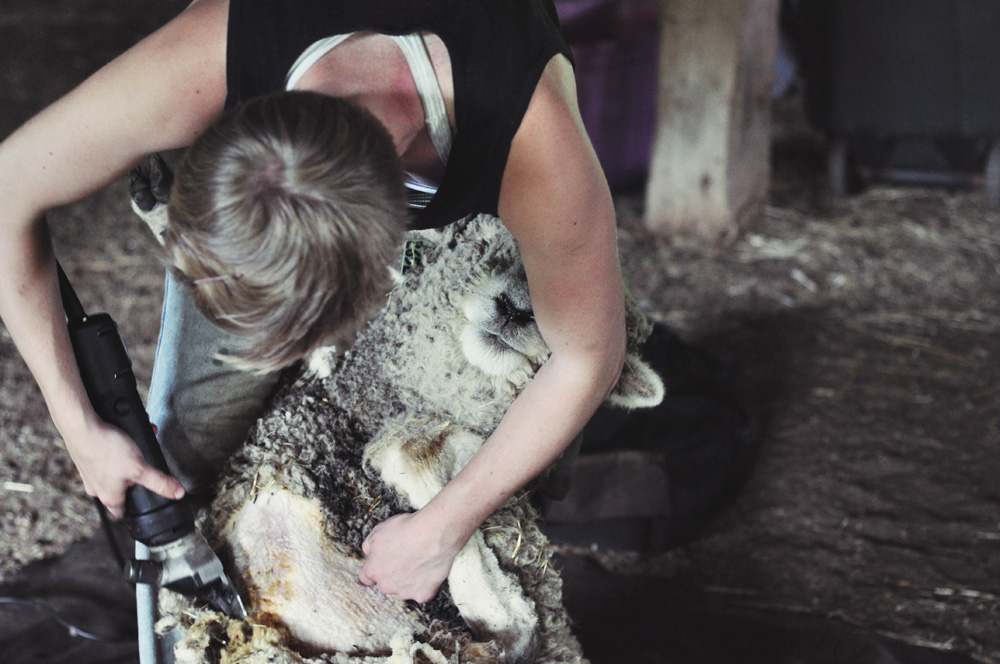 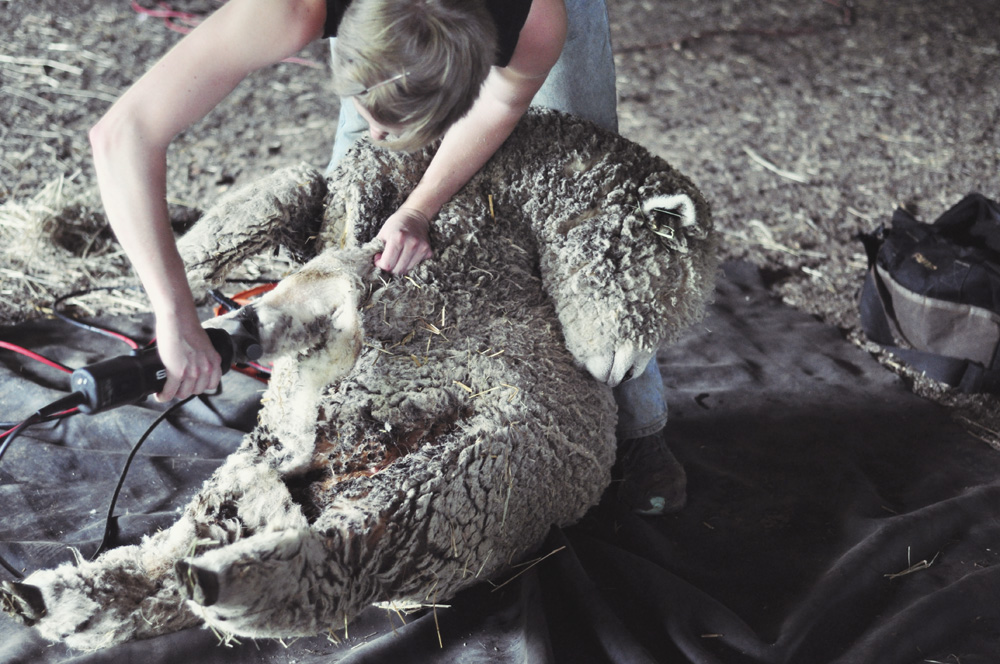 I remember when Sarah delivered the sheep to us a few years ago…she handed me two tool boxes full of sheep shears, clippers, blades, oil (and bandaids.) She said her husband went to a shearing school and the one thing he learned was that he never wanted to shear sheep.  I did get interested in the blades though, admitedly too interested. I read up on the industry standards and soon enough my search ad me looking at human clippers too. I think I enjoy the mechanical feeling, the process of hair falling to the floor and the finished product sitting there visible for all to see.

I’ve sheared a few sheep in my day. In fact, the very first time I met Dan’s family I sheared their ram lamb. As the men of the family struggled to get the sheep down on a tarp and in to position, I stepped in, did the old ‘bend the neck’ trick and the ram dropped down onto his side so I could zip off his fleece.

I’m pretty sure I sealed the deal with his family right there. 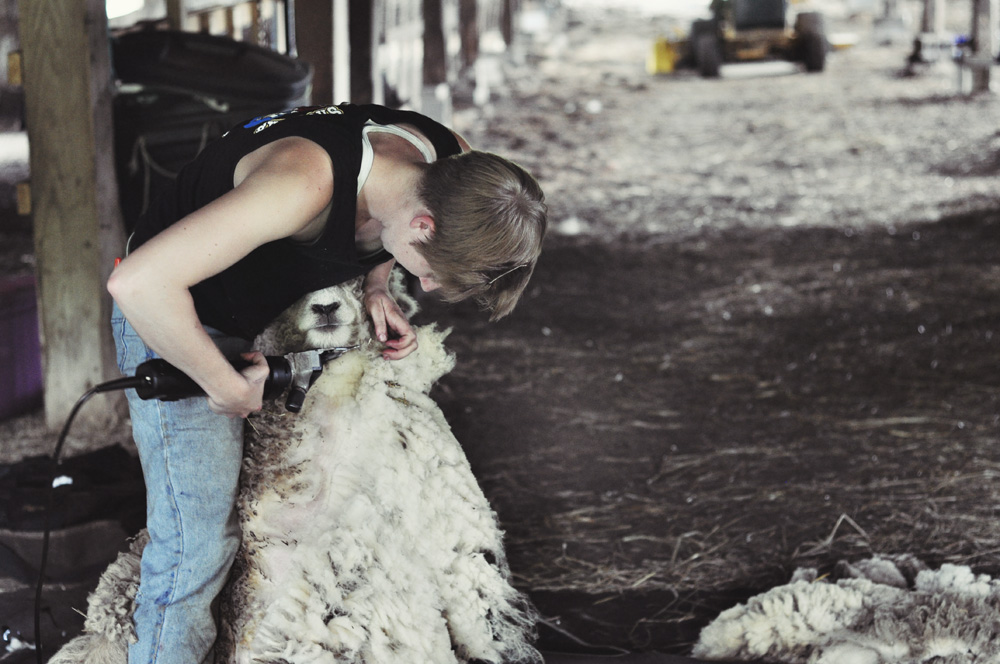 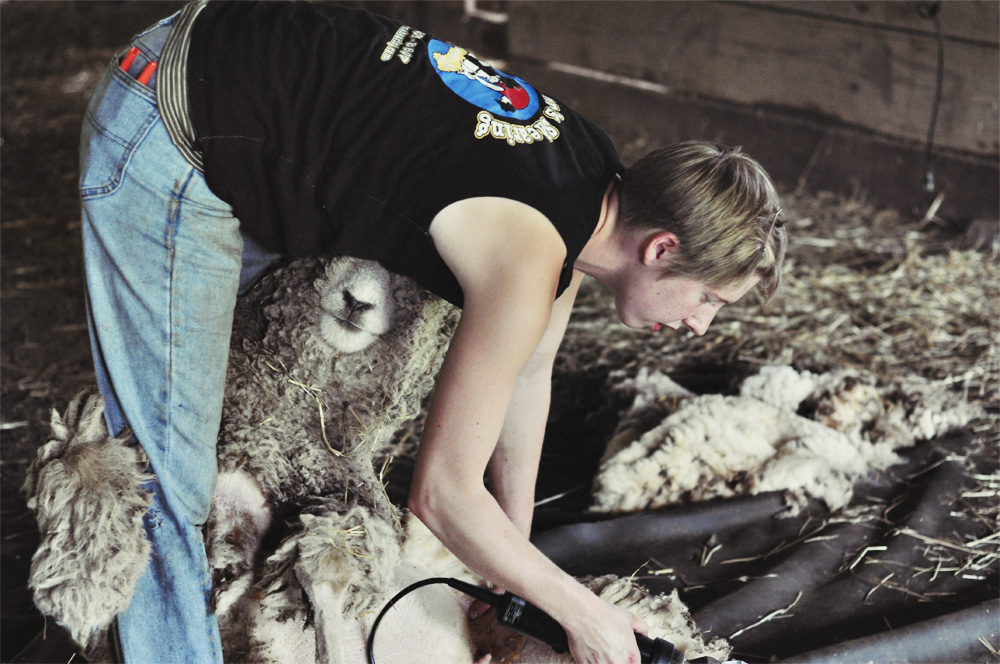 But except for buzzing down our lambs for the fair (what we call slick-shearing) I am ridiculously rusty, out of practice and a complete nervous-Nellie. On top of that, Southdowns go down in the books as one of the toughest sheep to shear because of their dense fleece.

Last year, my sister sheared for me and one swipe into the job she turned to me and said, “I think I bit off more than I can chew.” But she muscled through and we got the job done.

But you know how sometimes in life there are jobs that you can hire out to have someone do and you think to yourself, Why have I waited so long to do this? and This is worth every single penny!. Yeah, that’s how I felt about hiring someone to shear the lambs for me this year.

Standing there watching Kristen shear my sheep, realizing that this huge job was being taken care of by someone else and someone who was doing such an amazing job? I could kiss her lanolin and wool-covered hand. 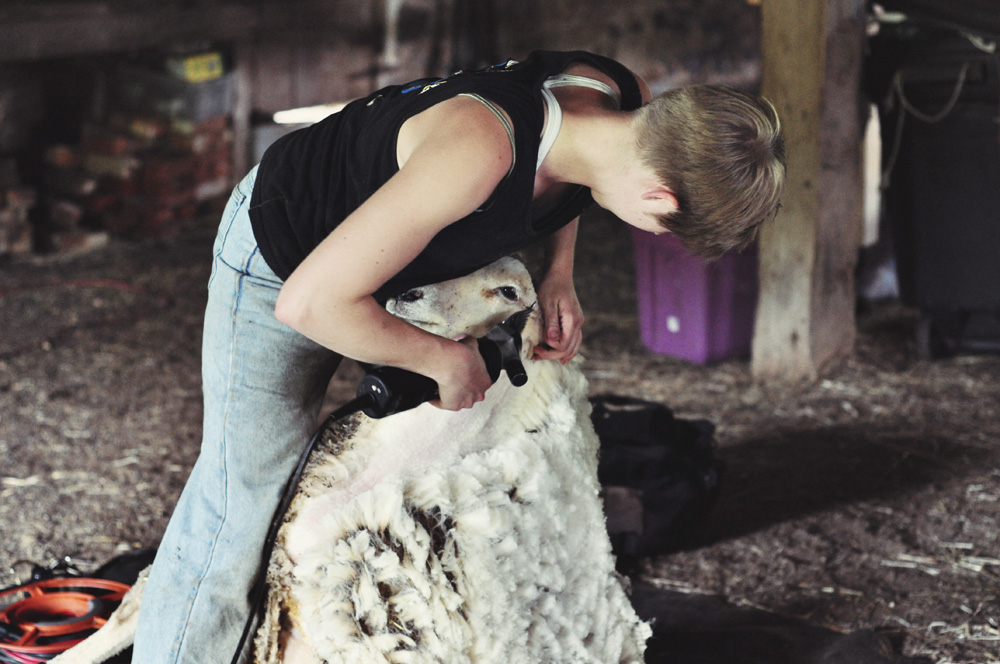 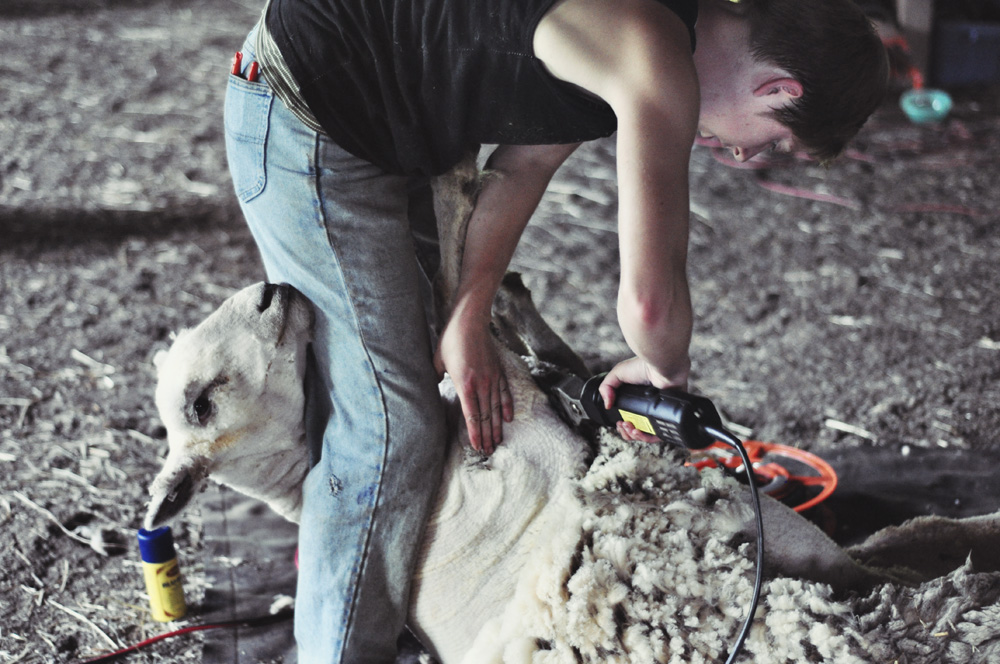 Kristen makes the rounds shearing in the Philadelphia area and we were lucky enough to catch her on a day when she had a few farms to shear in our area. She couldn’t have been nicer, kinder or more patient with my sheep. She was the best.

Kristen shears in the New Zealand-style which means she shears them on the ground versus up on a stand. The day before she came, we eased way back on the lambs’ water and feed so that they would be more comfortable while she sheared them. This way, their bellies aren’t full when they are being bent into position, they are less apt to fight and fuss and less apt to get cut. 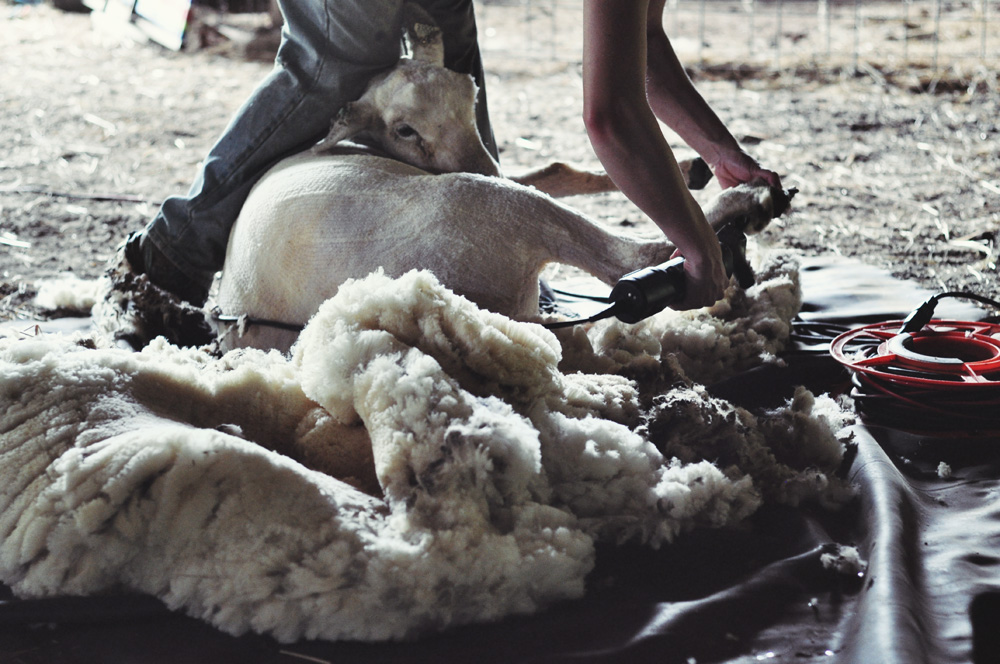 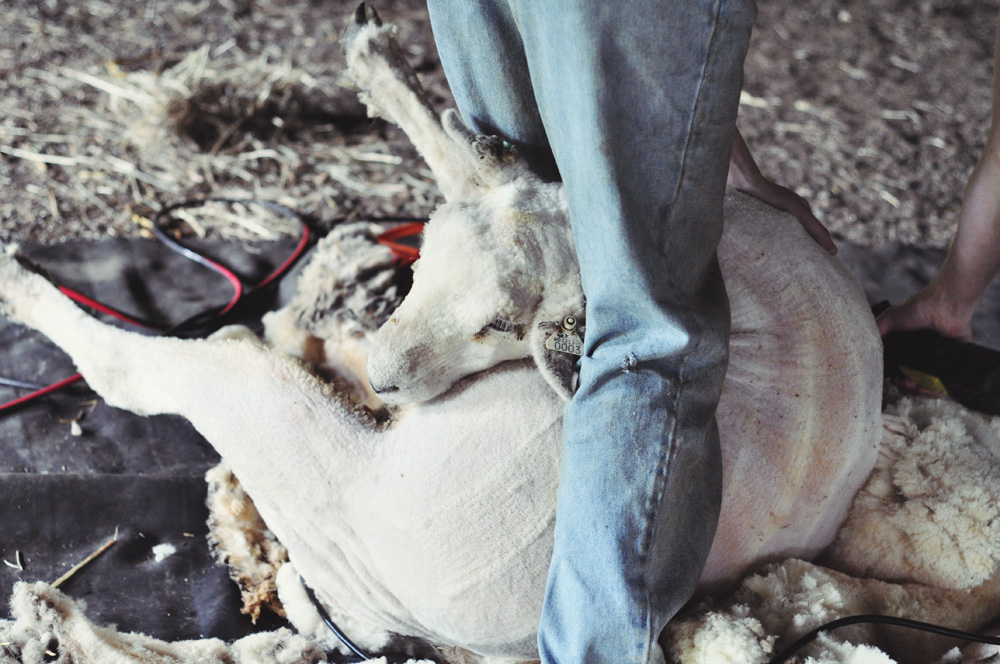 We asked Kristen how she ended up as a shearer and she looked up and said, “This is what happens when you go to art school.” In reality, Kristen majored in fiber arts and is hoping to have her own flock some day. She wants to do the whole process from growing the herbs to dye the wool, to raising her flock, shearing her sheep and turning the fibers into goods. Now, she’s traveling from farm to farm learning and watching and saving money.

We asked Kristen how many lambs she could shear in a day and she said eighty. I’ll let you just sit with that fact for a moment. I thought for sure she was about to say eight. But eighty? Be still my heart (and achey back.) 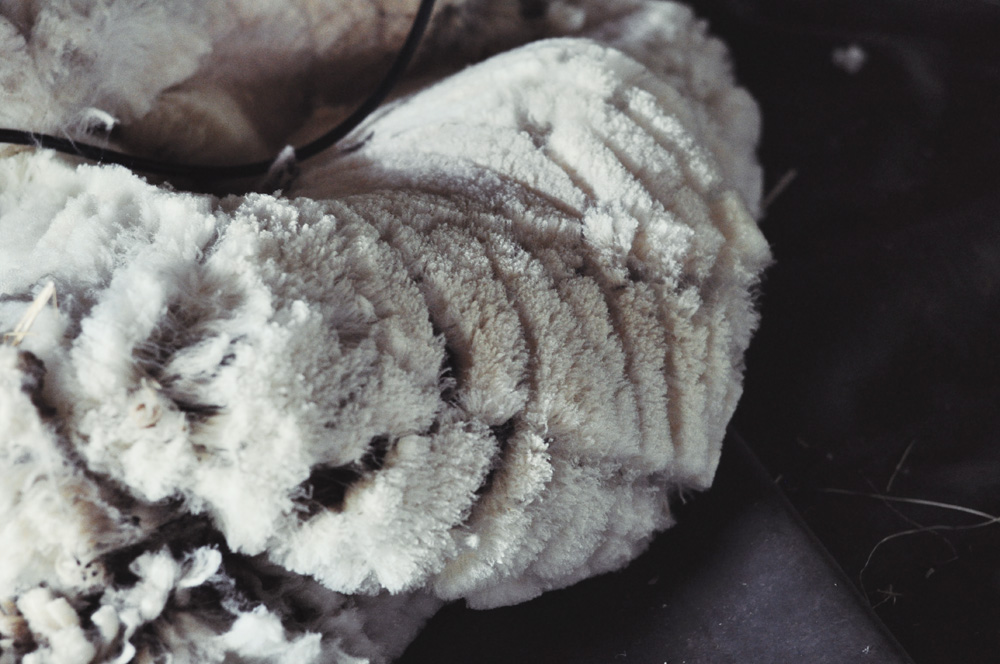 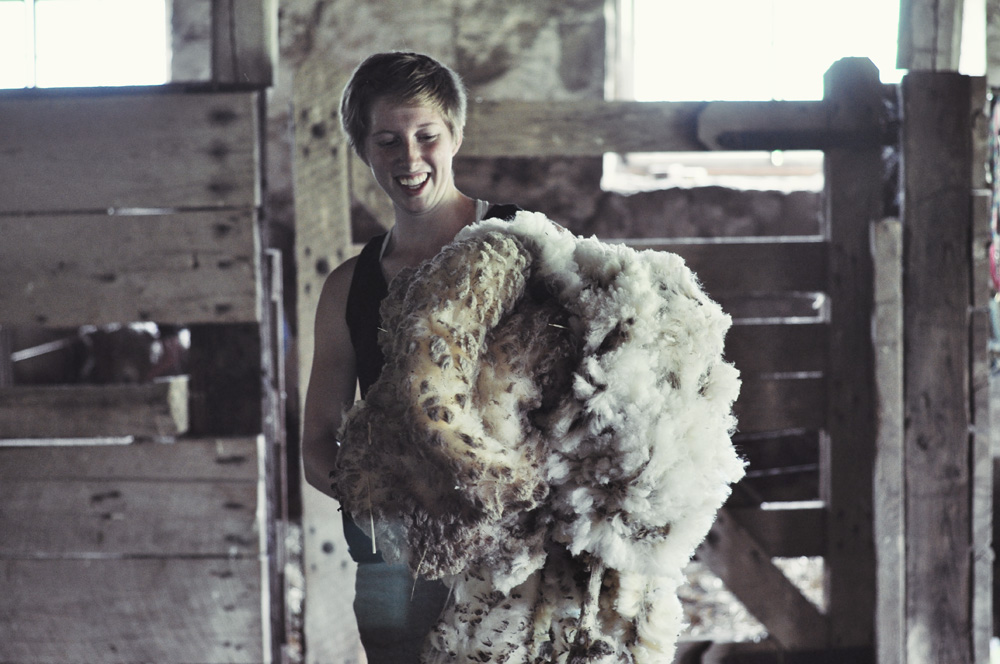 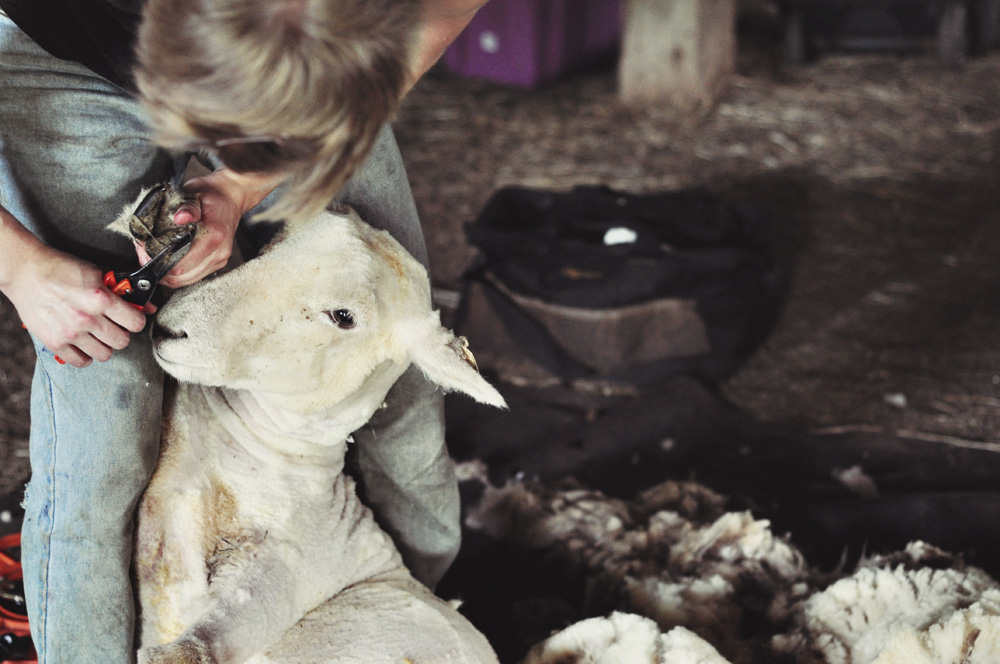 The lambs get the full service treatment. After they are sheared their hooves are trimmed (another job I hate), and then they are re-introduced to the other sheep.

This part is always pretty humorous as they suddenly don’t recognize each other and have to go through the whole meeting process again. There is much head-butting and foot-stomping and baa’ing for their friends, even though they’re standing right next to each other.

We kept some of our wool–the Southdown wool isn’t the best quality for spinning–but we use it for a wreath project that I hope to share some day soon. The rest of the wool we give to Kristen who takes it to the Maryland Wool Pool and gets a few dollars a pound for it.

So now the deed is done. And there is happiness all around…except for maybe the sheep–whose missing wool has exposed their gigantic bellies. Next on the schedule–a rigorous diet and exercise plan. 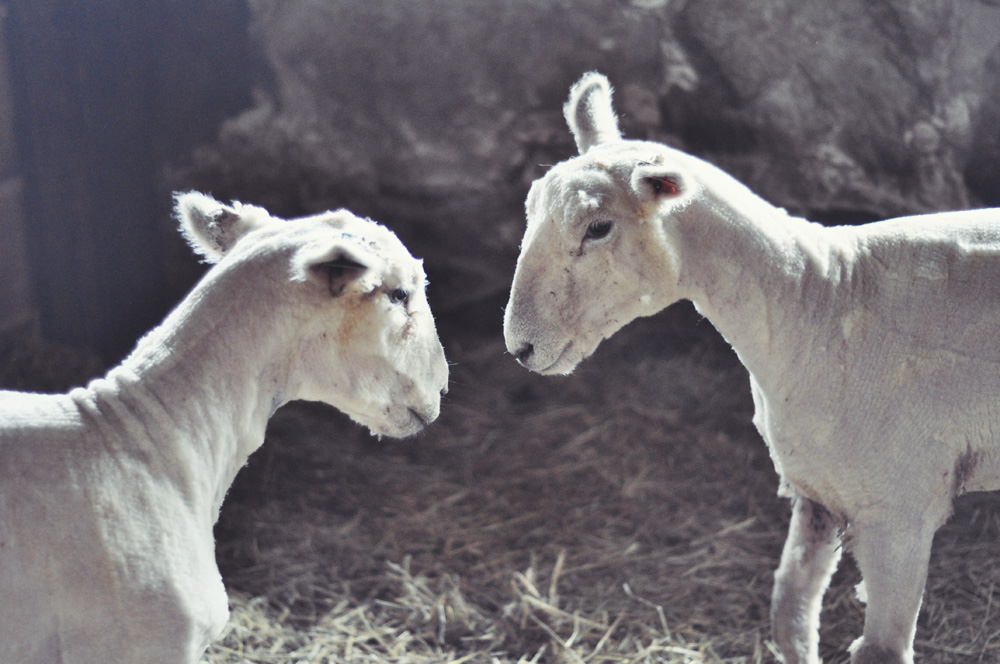 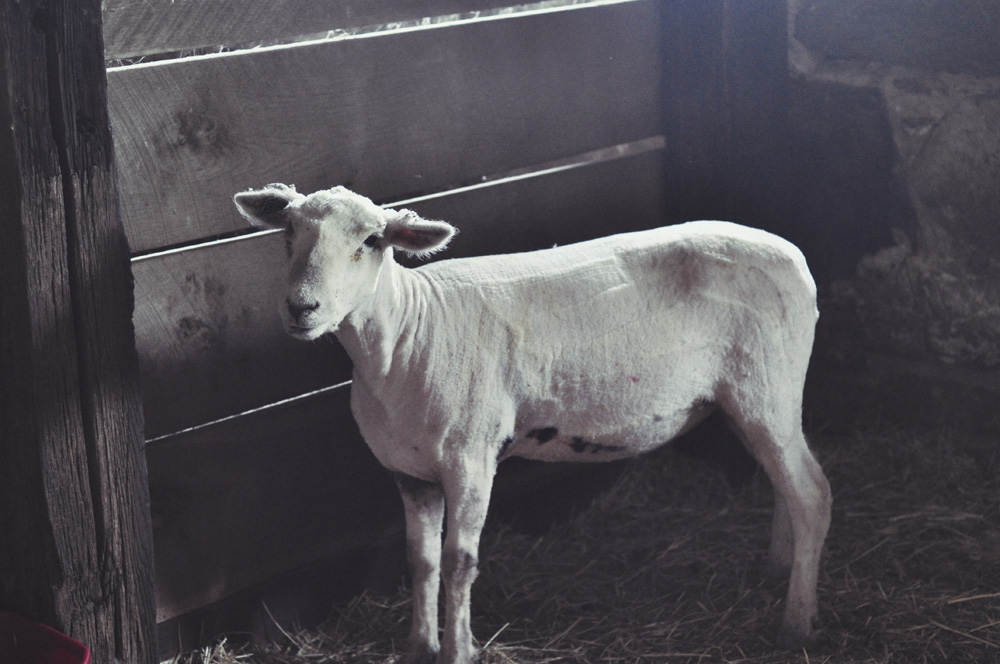 5 comments on “Shave and a haircut :: Shearing the sheep”