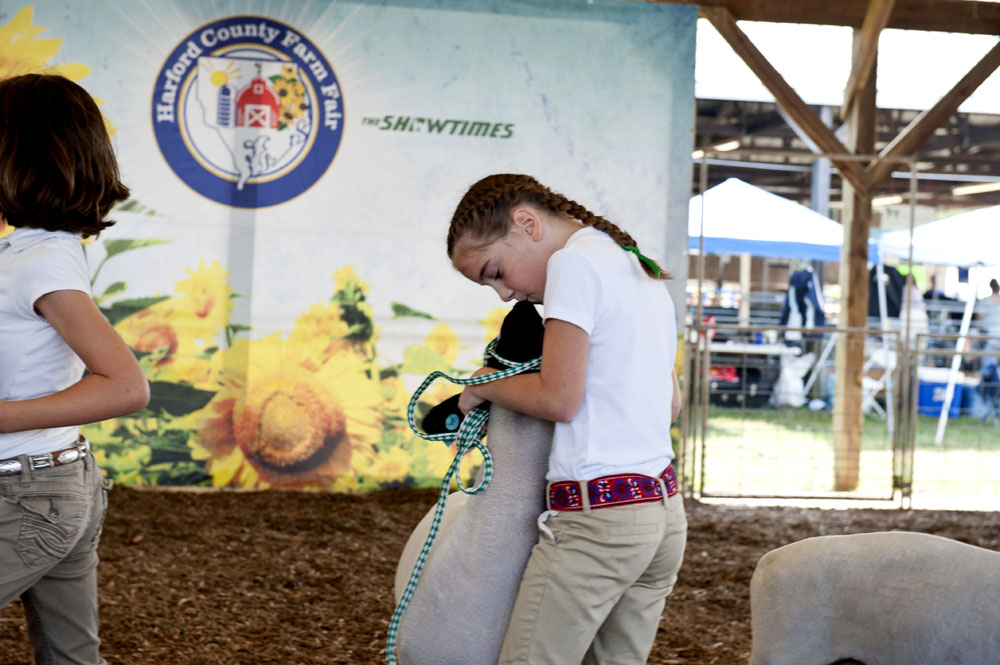 There’s a part of the county fair that I skim over every year. It’s one of the hardest parts of the fair for the girls, and for me. And it’s one of the parts that’s hardest for most people to understand. But at the same time, I think it’s one of the most unique and important pieces of the girls’ 4-H experience. Every year, I remind them of how important it is and how important their role in it is.

The reality is that the lambs we purchase in the spring for the 4-H lamb project are raised as market lambs. This means that they are usually wethers (castrated rams) and are raised to be sold for their meat. When you are raising them as a 4-H project, this means that at the end of the fair they are sold in the livestock auction. 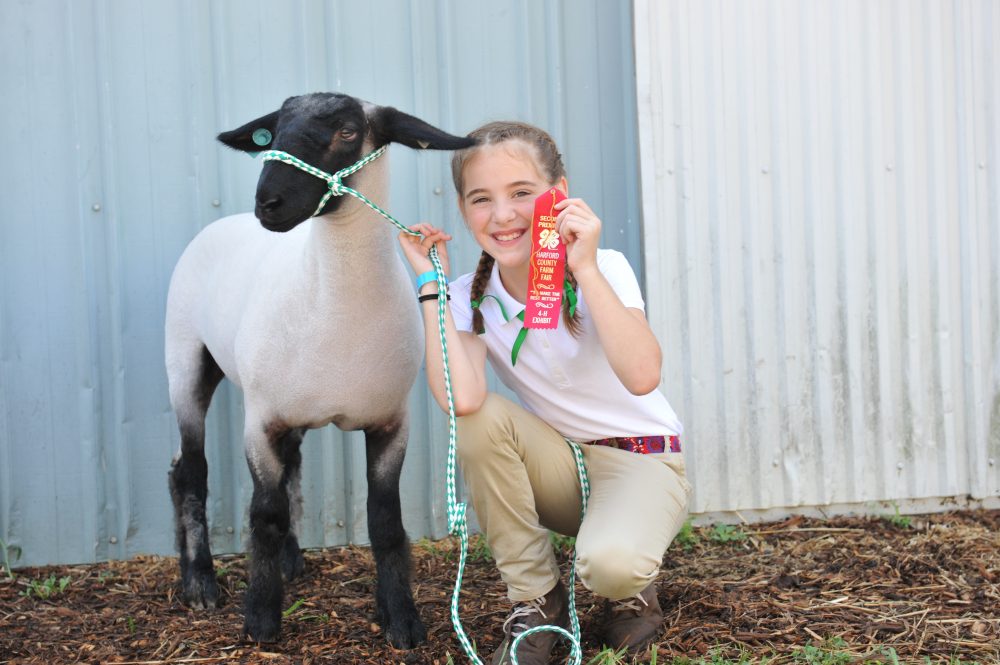 For 4-Hers and for my girls in particular, this comes with lots of responsibility and understanding. If there ever was an opportunity to understand and honor where your food comes from there’s not much that can be matched by raising it yourself. Not only are they learning about the sources of their food, they are playing an important part in the process. The lambs are treated with respect, kindness and gentleness. They are kept clean and healthy, exercised regularly and fed properly. They are nurtured and loved and for the several months that they are in our care, given the best home possible.

But despite the fact that we all know how this story is going to end, it doesn’t make it any easier. Hearts still manage to become entwined with these four-legged woolly animals that live in our barn. 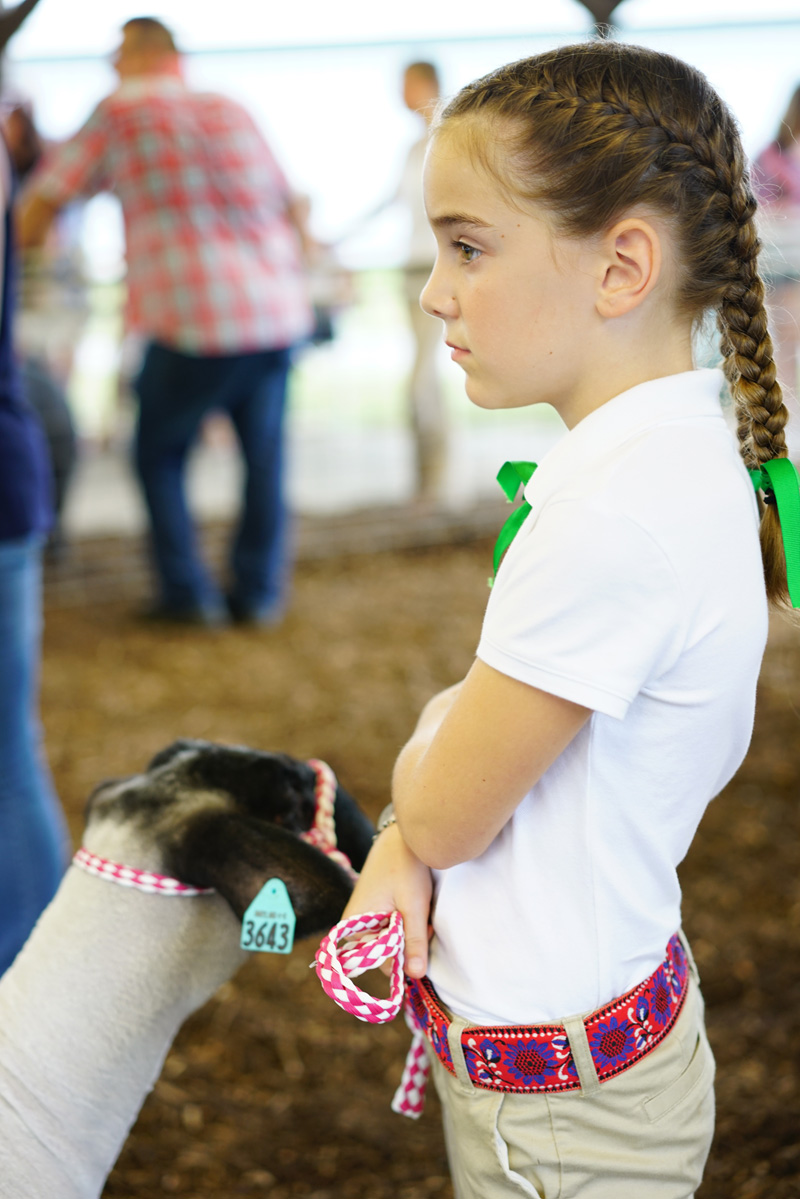 For my girls, the goodbyes come on Saturday night. The excitement of the auction, under the lights, in the show ring barn, is mingled with dread of what’s to come. It’s not easy for them, but they understand how important what they are doing is. They get it. They know they’ve given this lamb the best care they possibly can. But it doesn’t make it any easier.

This year however, was different. For starters, it was Elizabeth’s first year showing. The first year is always so hard. And Elizabeth in particular is my tender-hearted child. She still cries some nights for her favorite barn cat that disappeared years ago. And when she was younger, she got especially attached to one of Emma’s lambs and sobbed the whole way home from the fair. To make things more complicated, her lamb was a ewe–a girl. And Elizabeth and her lamb Nora, became especially attached to each other.

As spring progressed it became pretty obvious to me that Elizabeth’s lamb in particular was going to do well at the fair. And in the back of my head, I was beginning to entertain the idea that this might be a lamb we’d want to keep–in order to breed her and raise our own lambs. It seemed a shame to send such a nice little lamb thru the auction. 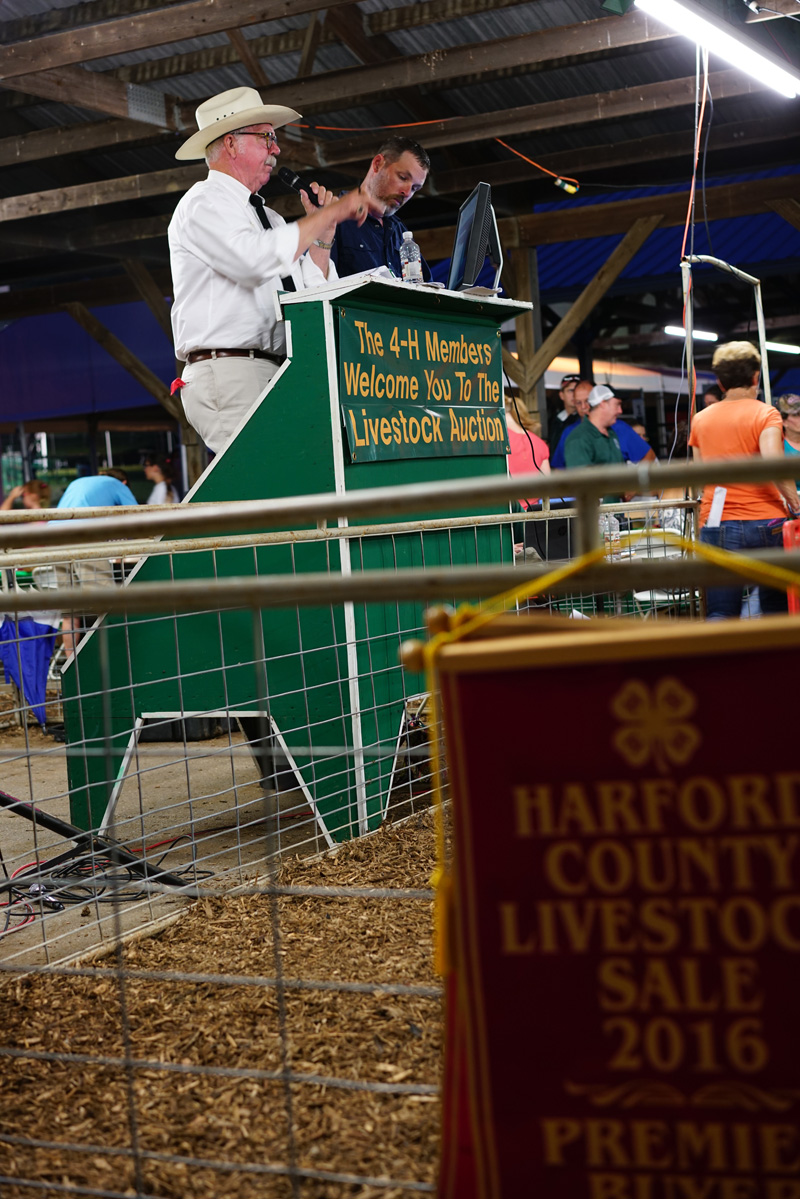 During the first few days of the fair there were lots of comments about Elizabeth’s lamb. People would stand outside our pen, eyeing our lambs. Many people thought we had one of the best looking lambs there. And while this may seem like an exciting prospect, it left us quite torn. If Nora won the show, we would be required to sell her. The Grand and Reserve Grand Champion lambs must go through the auction. Selling the champion animals in each species is an important part of the auction. Excitement (and prices) are always high.

A few days before the show, the girls and I sat down for lunch and I decided to talk to Elizabeth about my thoughts. Did she want to pull Nora from the show and bring her home? Did she want to put her in the show, knowing that if she won, she’d have to sell her? Were we counting our chickens before they hatched? After much discussion, Elizabeth decided that she wanted to go for it. She was going to put Nora into the show.

And then the bittersweet happened…Nora won Reserve Grand Champion. 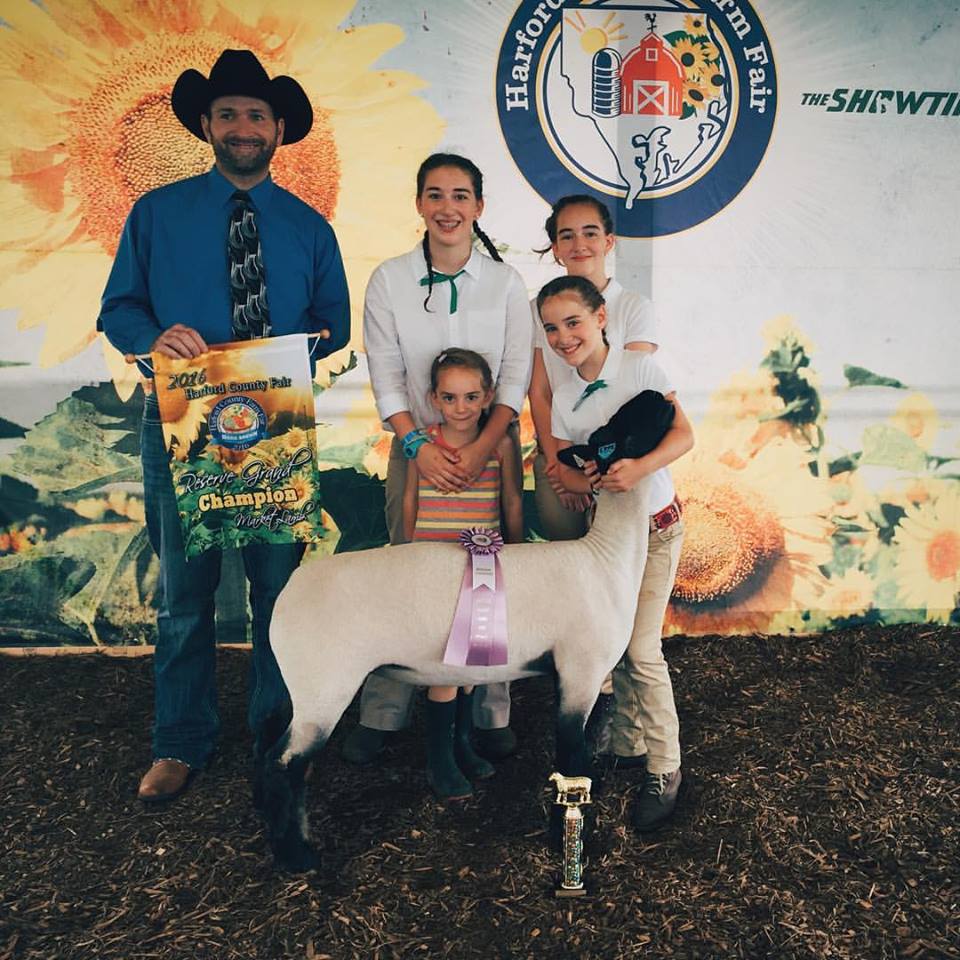 We were all thrilled to win but I have to admit my heart sunk just a bit when the judge shook her hand and gave her the big purple rosette ribbon.

When auction night arrived Elizabeth seemed okay. We discussed the idea of trying to buy her lamb back from whomever might buy her, but I wasn’t hopeful. It was guaranteed that the price would be high and I wouldn’t be able to afford to buy her back. And I hated to give Elizabeth any false hope.

As Elizabeth and I stood together waiting for her turn to go into the sale ring, she suddenly looked at me, her face twisted up, and she started to cry. And of course, like any strong, calm mother, I cried too. I wiped her tears and whispered in her ear how proud I was of her, and reminded her of what an important part of Nora’s life she had been. But the tears wouldn’t stop. 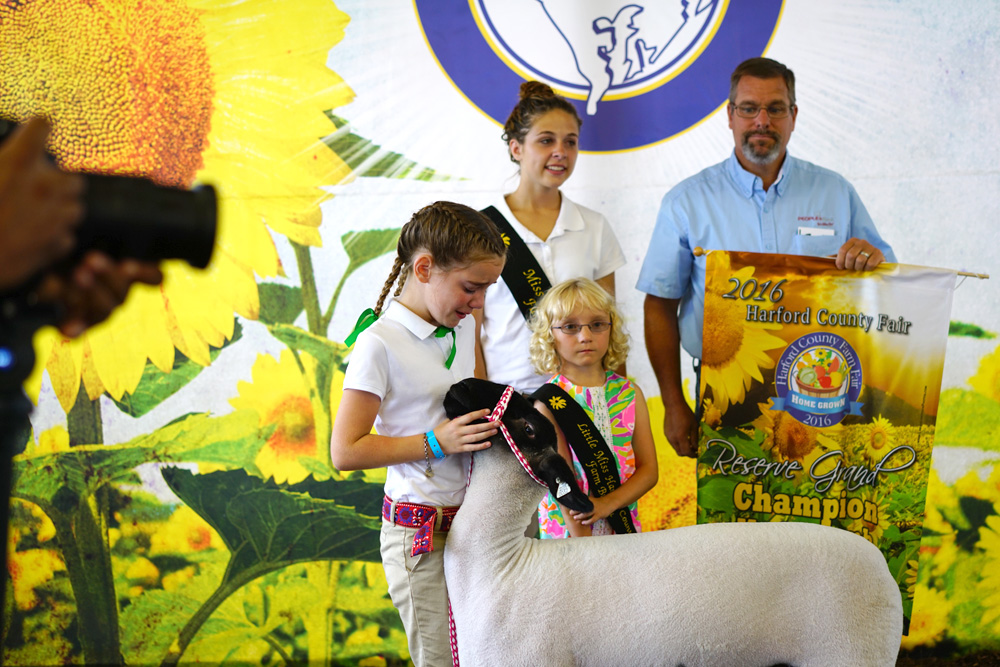 When her turn arrived to walk in the ring, in front of the crowd and the auctioneer, Elizabeth managed to pull herself together. But her red, puffy eyes gave away her sadness. I stood in the back and listened as the price climbed higher and higher. My hopes for buying back her lamb plummeted. When the gavel dropped and Nora was sold I was even more discouraged to find out she’d been bought by a bank*. It was not a business or a person I was familiar with and I figured there would be no way they would be willing to lose money and let me buy Nora back for a fair market price.

We headed back to the barn and put Nora in her pen. I told Elizabeth that we’d have to pull ourselves together. We’d need to go shake hands and thank her buyer. I told her I’d ask about buying Nora back but that I was doubtful I could afford her. I promised her I would try, but that she had to come with me when I asked. 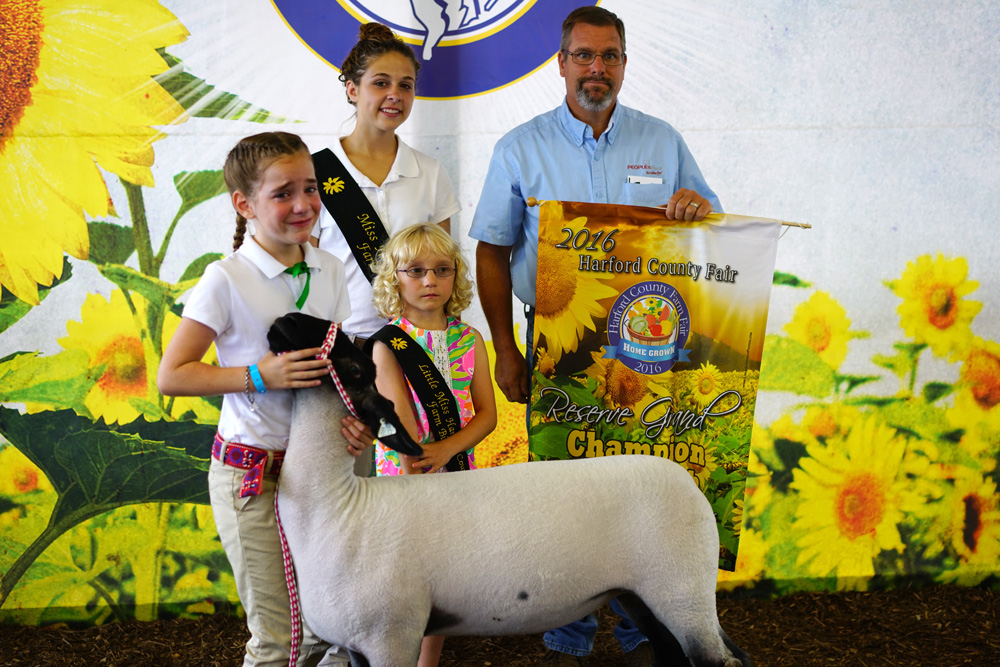 Eventually Elizabeth and I pushed through the crowds to find her buyer standing in the back. We thanked him for buying her lamb and for his support of 4-Hers like Elizabeth. Then, I explained the situation to him. I told him Nora was a ewe lamb and that we were originally hoping to bring her home to become a breeding lamb. I asked if there would be any way he’d consider letting us buy Nora back. Before the words were completely out of my mouth he stopped me. He told us that he lived on a farm and had a flock of sheep of his own. He said he could tell that this was a really nice ewe lamb. And he told us to keep her. “I’ll tell them at the auction table that I’m going to keep her, but you can just take her home.” We were ecstatic, to say the least. I offered him fair market value again, but he refused. And insisted that we keep her and keep Elizabeth’s earnings.

Not every year ends this way, but sometimes things work out just perfectly. Nora came home on Sunday evening, along with her pen mate Agnes–Mary’s ewe lamb. Once Mary’s buyer heard we were keeping one, she figured Nora would need a friend. And that’s how my little flock of lambs grew from 4 chubby Southdowns to 4 chubby Southdowns and 2 sweet ewe lambs named Nora and Agnes.

It was a very good year at the fair. And now that this story has flowed out of me tonight in long form, I’ll save the other updates for another time. I’m proud of these girls. For the hard, important work that they are doing. And for good people who give so freely, like that kind banker standing in the back corner of the sale barn.

*edited to add: I’ve had several people ask me to name the bank that bought Elizabeth’s lamb because they’d like to support them in exchange for their support of 4-Hers like Elizabeth. Nora’s buyer was People’s Bank.